In Goliath, New York Times best-selling author Max Blumenthal takes us on a journey through the badlands and high roads of Israel-Palestine, painting a startling portrait of Israeli society under the siege of increasingly authoritarian politics as the occupation of the Palestinians deepens. Beginning with the national elections carried out during Israel's war on Gaza in 2008/9, which brought into power the country's most right-wing government to date, Blumenthal tells the story of Israel in the wake of the collapse of the Oslo peace process. As Blumenthal reveals, Israel has become a country where right-wing leaders like Avigdor Lieberman and Bibi Netanyahu are sacrificing democracy on the altar of their power politics, where the loyal opposition largely and passively stands aside and watches the organized assault on civil liberties, where state-funded Orthodox rabbis publish books that provide instructions on how and when to kill gentiles, where half of Jewish youth declare their refusal to sit in a classroom with an Arab, and where mob violence targets Palestinians and African asylum seekers scapegoated by leading government officials as "demographic threats". Immersing himself like few other journalists inside the world of hard-line political leaders and movements, Blumenthal interviews the demagogues and divas in their homes, in the Knesset, and in the watering holes where their young acolytes hang out, and he speaks with those political leaders behind the organized assault on civil liberties. As his journey deepens, he painstakingly reports on the occupied Palestinians challenging schemes of demographic separation through unarmed protest. He talks at length to the leaders and youth of Palestinian society inside Israel now targeted by security service dragnets and legislation suppressing their speech and provides in-depth reporting on the small band of Jewish Israeli dissidents who have shaken off a conformist mindset tha 1. Language: English. Narrator: Richard Powers. Audio sample: http://samples.audible.de/bk/blak/005957/bk_blak_005957_sample.mp3. Digital audiobook in aax. A High Price: The Triumphs and Failures of Israeli Counterterrorism  , Hörbuch, Digital, 1, 1219min

The product of painstaking research and countless interviews, A High Price offers a nuanced, definitive historical account of Israel's bold but often failed efforts to fight terrorist groups. Beginning with the violent border disputes that emerged after Israel's founding in 1948, Daniel Byman charts the rise of Yasser Arafat's Fatah and leftist groups such as the Popular Front for the Liberation of Palestine--organizations that ushered in the era of international terrorism epitomized by the 1972 hostage-taking at the Munich Olympics. Byman reveals how Israel fought these groups and others, such as Hamas, in the decades that follow, with particular attention to the grinding and painful struggle during the second intifada. Israel's debacles in Lebanon against groups like the Lebanese Hizballah are examined in-depth, as is the country's problematic response to Jewish terrorist groups that have struck at Arabs and Israelis seeking peace. In surveying Israel's response to terror, the author points to the coups of shadowy Israeli intelligence services, the much-emulated use of defensive measures such as sky marshals on airplanes, and the role of controversial techniques such as targeted killings and the security barrier that separates Israel from Palestinian areas. Equally instructive are the shortcomings that have undermined Israel's counterterrorism goals, including a disregard for long-term planning and a failure to recognize the long-term political repercussions of counterterrorism tactics. 1. Language: English. Narrator: Luke Truan. Audio sample: http://samples.audible.de/bk/adbl/011543/bk_adbl_011543_sample.mp3. Digital audiobook in aax. Operation Protective Edge, launched in early July 2014, was the third major Israeli assault on the Gaza Strip in six years. It was also the most deadly. By the conclusion of hostilities some seven weeks later, 2,200 of Gaza's population had been killed, and more than 10,000 injured. In this book, journalist Mohammed Omer, a resident of Gaza who lived through the terror of those days with his wife and then three-month-old son, provides a first-hand account of life on-the-ground during Israel's assault. The images he records in this extraordinary chronicle are a literary equivalent of Goya's Disasters of War: children's corpses stuffed into vegetable refrigerators, pointlessly because the electricity is off; a family rushing out of their home after a phone call from the Israeli military informs them that the building will be obliterated by an F-16 missile in three minutes; donkeys machine-gunned by Israeli soldiers under instructions to shoot anything that moves; graveyards targeted with shells so that mourners can no longer tell where their relatives are buried; fishing boats ablaze in the harbor. Throughout this carnage, Omer maintains the cool detachment of the professional journalist, determined to create a precise record of what is occurring in front of him. But between his lines the outrage boils, and we are left to wonder how a society such as Israel, widely-praised in the West as democratic and civilized, can visit such monstrosities on a trapped and helpless population. 1. Language: English. Narrator: Suzanne Toren. Audio sample: http://samples.audible.de/bk/adbl/025828/bk_adbl_025828_sample.mp3. Digital audiobook in aax. The author of the classic New York Times best seller Passages returns with her inspiring memoir - a chronicle of her trials and triumphs as a groundbreaking "girl" journalist in the 1960s, to iconic guide for women and men seeking to have it all, to one of the premier political profilers of modern times. Candid, insightful, and powerful, Daring: My Passages is the story of the unconventional life of a writer who dared - to walk New York City streets with hookers and pimps to expose violent prostitution; to march with civil rights protesters in Northern Ireland as British paratroopers opened fire; to seek out Egypt's president Anwar Sadat when he was targeted for death after making peace with Israel. Daring is also a beguiling love story of Sheehy's tempestuous romance with and eventual happy marriage to Clay Felker, the charismatic creator of New York magazine. As well, Sheehy recounts her audacious pursuit and intimate portraits of many 20th-century leaders, including Hillary Clinton, Presidents George H. W. and George W. Bush, and the world-altering attraction between Margaret Thatcher and Mikhail Gorbachev. Sheehy reflects on desire, ambition, and wanting it all - career, love, children, friends, social significance - and lays bare her major life passages: False starts and surprise successes, the shock of failures and inner crises; betrayal in a first marriage; life as a single mother; flings of an ardent, liberated young woman; her adoption of a second daughter from a refugee camp; marriage to the love of her life and their ensuing years of happiness, even in the shadow of illness. Now stronger than ever, Sheehy speaks from hard-won experience to today's young women. Her fascinating, no-holds-barred story is a testament to guts, resilience, smarts, and daring, and offers a bold perspective on all of life's passages. 1. Language: English. Narrator: Bernadette Dunne. Audio sample: http://samples.audible.de/bk/harp/004116/bk_harp_004116_sample.mp3. Digital audiobook in aax. 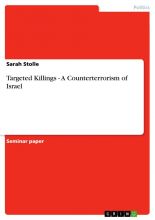 Targeted Killings - A Counterterrorism of Israel

Please note that the content of this book primarily consists of articles available from Wikipedia or other free sources online. The 2010 Zahedan bombings were two suicide bombings on 15 July 2010 that targeted Shia worshippers in Iran, including members of the Revolutionary Guards. The bombings targeted those celebrating the birthday of a Muslim saint at the Jamia mosque in Zahedan, Sistan-Baluchestan. Responsibility for the attacks was claimed by Jundullah in revenge for the execution of their leader by the Iranian government. Amongst the reactions and national and supranational condemnations, Iran blamed the USA and Israel for facilitating the attack.

High Quality Content by WIKIPEDIA articles! Salah Mustafa Muhammad Shehade (or Shehadeh) (Arabic: ), (born in Gaza on February 24, 1953 - d. July 22, 2002). He led the Izz ad-Din al-Qassam Brigades military wing of Palestinian Islamist movement Hamas, until his targeted assassination by Israel. A member of Hamas since the formation of the group in 1987, he quickly became one of its influent leaders and was arrested a few times by Israel or the Palestinian Authority. After Yahya Ayash's death, in 1996, Shahade became a top leader in the group, along with Mohammed Deif and Adnan al-Ghoul. During the Al-Aqsa Intifada, Israel accused him of masterminding several attacks against both Israeli soldiers and civilians in the Gaza strip and in Israel proper. It was also reported that Shahade was involved in the production of Qassam rockets, fired against Israeli civilian targets, and other homemade weapons, as well as in the smuggling of military equipment in the Gaza strip.

High Quality Content by WIKIPEDIA articles! Racism in association football is the abuse of players, officials and fans because of their skin colour, nationality, religion or ethnicity. Some may be targeted because of their association with an opposing team. However, there have been instances of individuals being targeted by their own fans. Israeli stadiums are not free from racism, and first racist incidents there took place in the 1970s, when Arab player Jimmy Turk joined Hapoel Tel Aviv. Turk was subjected to anti-Arab abuse during nearly every game he played. According to Itzik Shanan, director of communications at the New Israel Fund, among most racist fans are supporters of Beitar Jerusalem, also Hapoel Tel Aviv fans have been using slogans promoting a Holocaust against Maccabi Tel Aviv. Israeli right wing football supporters taunt Arab players during games, especially those who play for the mixed Arab-Jewish team Bnei Sakhnin.

Please note that the content of this book primarily consists of articles available from Wikipedia or other free sources online. Palestinian rocket and mortar attacks on Israel from the Gaza Strip have occurred since 2001. The weapons, often generically referred to as Qassams, were initially crude and short-range, mainly affecting the Israeli city of Sderot and other communities bordering the Gaza Strip. However, in 2006 more sophisticated rockets began to be deployed, reaching the larger coastal city of Ashkelon, and by early 2009 major cities Ashdod and Beersheba had been hit. In 2012, Israel's capital Jerusalem and commercial center Tel Aviv were targeted with locally made "M-75" and Iranian Fajr-5 rockets. Learn more about the Palestinian rocket attacks on Israel, their causes, aims and results in the following pages.